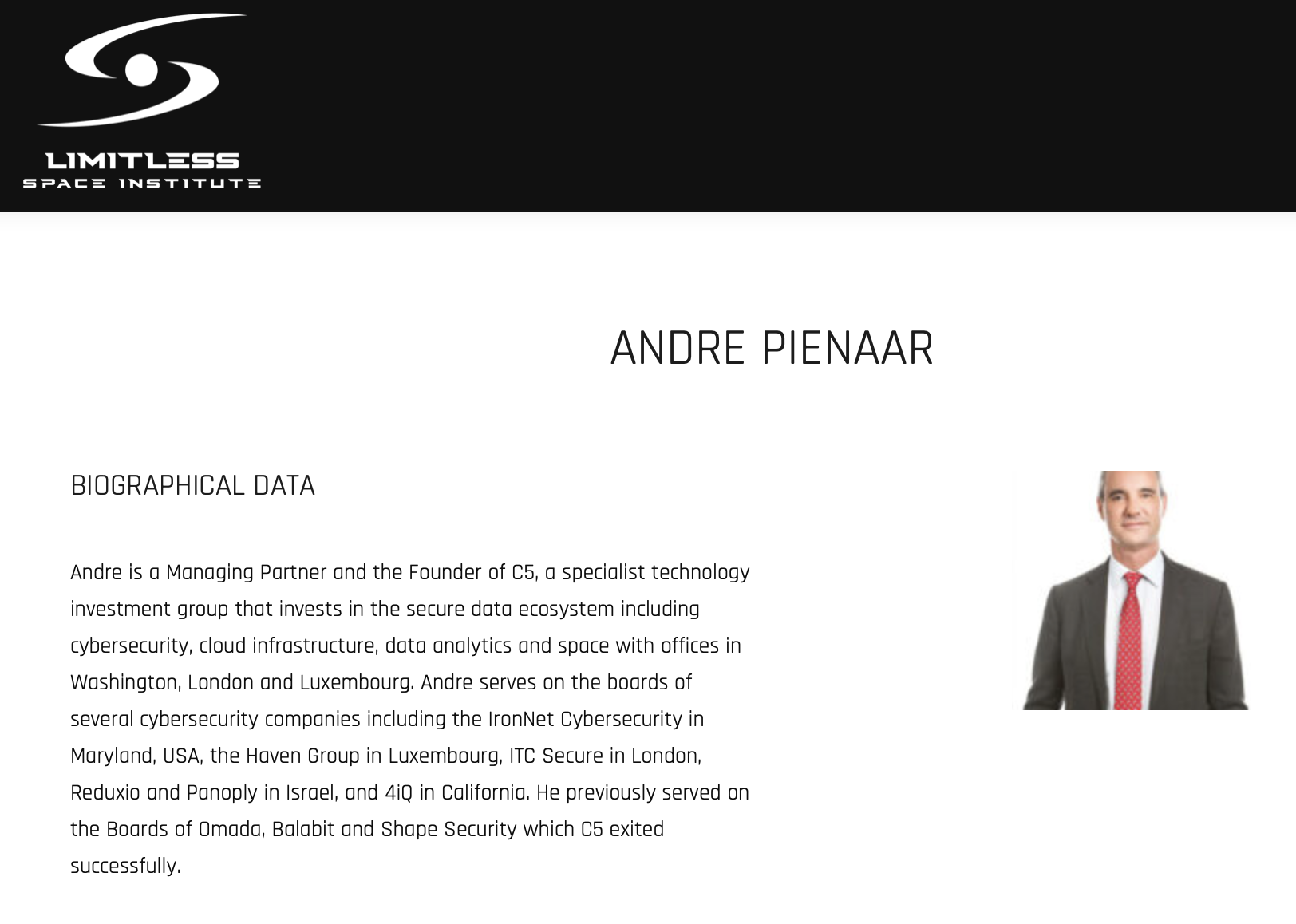 Why I joined the Advisory Council of the Limitless Space Institute

I am honoured to join the Advisory Council of the Limitless Space Institute (LSI) with such an esteemed group of space leaders.

The LSI is a not-for-profit organisation founded by the visionary U.S. space entrepreneur, Dr. Kam Ghaffarian. Dr. Ghaffarian built one of NASA’s largest engineering partners and he is now building some of the leading US companies like Axiom Space and Intuitive Machines. The LSI is led by the distinguished NASA veteran Brian Kelly, who served for 37 years as a leader in NASA and led the NASA’s Human Flight Directorate.

How did I come to be associated with such a distinguished group of space leaders?

As a venture capital investor, it was the importance of space to cybersecurity- the focus of our investment strategy in C5 Capital- that led me to look deeper into the sector. The US government inextricably linked the terrestrial and the space economies when GPS was made available to provide reliable time, location and navigation to everyone worldwide. Today every aspect of our lives depends on GPS. As a result, space is the strategic high ground of cybersecurity.

As I studied the space industry, I was thrilled to find the unfolding of a new, exciting era of discovery in space.

This year, in Low Earth Orbit (LEO), we are celebrating the 20th anniversary of the International Space Station (ISS). Humans have now been living and working permanently in space for two decades.

Whole new worlds are being discovered. Since 1992, astronomers have discovered nearly 4,300 planets outside of our solar system, so called exoplanets. A new analysis of the data collected by NASA’s Kepler space telescope suggest that there are at least 300 million solar systems in our galaxy that have at least one habitable planet and that there could be as many as 2 billion.

NASA’s Transiting Exoplanet Survey Satellite (TESS) discovered its first Earth-size planet in its own star’s habitable zone. The range of distances between the new planet- called TOI 700 d- and its sun is such that it may be just right to allow the presence of liquid water on its surface.

NASA is working on missions that will return humans to live permanently on the moon and to land humans for the first time on Mars.

It is an overnight flight from US soil to the ISS. It is a three-day journey to the moon. It takes NASA’s robotic spacecraft seven months to travel to Mars.

By 2050 humans will have become an interplanetary species with permanent human settlements on the moon and Mars and on multiple orbital space stations in our solar system.

We have had the first unmanned mission leave our solar system- NASA’s Voyager-1- to enter interstellar space after a journey of 25 years in 2012. There are at least 6 others on their way.

We estimate that the nearest solar system to ours- Alpha Centauri B- is 4.3 light years away. Moving beyond our own solar system will be the next generation’s frontier for discovery.

Space exploration today gives us a deeper understanding of the preciousness of our own amazing blue planet, while we grow in knowledge of the limitless possibilities of the unexplored new worlds and resources beyond our own solar system.

The challenge to make deep space exploration sustainable is a challenge of the human spirit. It requires us to inspire and educate a next generation of space leaders, while working through innovation and scientific discovery to equip the next generation with the ability to cross the vast distances of space within a human’s lifespan safely. It is this bold mission that drew me to join the LSI.

At the core of LSI is a remarkable group of scientists and engineers led by NASA veteran Dr. Sonny White who are thinking out of the box about alternative ways to accelerate space travel safely.

LSI’s global scholarship programme is partnered with universities all over the world to encourage students to help solve some of the hardest challenges of deep space travel.

It is this combination of leading scientists and engineers with young scholars that offers the keys to the future.

The new careers and jobs that the space industry will create as it rapidly grows to be an USD 1 trillion industry is as limitless as the 100,000 light-years expanse of our galaxy. Developing this talent for the future requires the focused inspiration and imagination that LSI provides today.

My childhood in Africa gave me a deep attachment to nature. The majesty of the African sky imbued me with a life-long sense of awe. The African sky is endless, and dramatically beautiful. The sun rises and sets like a huge orange ball of fire. At night the stars gleam and sparkle like polished diamonds against a dark velvet cloth.

By joining the Board of LSI, I hope to help scale access to the limitless possibilities of space and to the greatest adventure of our lifetime- to become an interplanetary people- to young people everywhere, that will take us deeper into these magnificent skies.